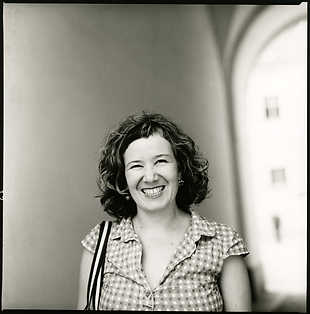 Viennese Daniela Swarowsky is since 1990 working both in the visual arts as well as in the experimental music field. She has been involved in many cross-disciplinary projects, which involve audio-, visual art as well as theory. She lived and worked from 1994 until 2000 as curator and producer in New York: (selection) Trainee-stipend of Austrian Cultural Ministry for the Kitchen/NY, producer of sound-art-piece “Cloudchamber”, Managing Director of SEM Ensemble, curator of a diversity of experimental music festivals sound-art exhibition and series: ANY ART Festival, Music While you Wait, among_others3 (US, Europe).

DS moved in 2000 to Rotterdam, where she took over the position of managing director of the Dutch Electronic Art Festival/DEAF2000 by V2 Organization. Since then she solely develops her own artistic- and curatorial practice: (selection) art projects like “Dreamgarden_Internal Landscapes” Rotterdam Cultural Capital 2001, “Vacation_Destination>Home”, Zwaanshals in Motion Rotterdam 2003-2006. Curator of concert series Xperiment>L, women in electronic music, 12 concerts in Arminius from 2004-2006. Since 2004 she is involved in IMA, where she curates since 2007 the newly conceive IMAutomaat residency- and festival, bringing Austrian and international female sound-artists together for a week to experiment, attend workshops, start new collaborations and finally perform their work during a 2-days festival.