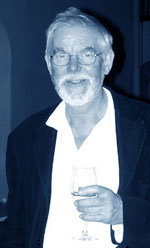 1941 born in Vienna, grew up in Carinthia, studied composition and electro-acoustic music in Vienna under Karl Schiske and Gottfried von Einem and in Paris under Olivier Messiaen, René Leibowitz, Pierre Schaeffer and Francois Bayle. Since 1970 Kaufmann has taught this at the School of Music and Performing Arts at the University of Vienna. Today, he teaches two master classes, one in composition (since 1990) and one in electro-acoustic composition (since 1997. Since 2001 he has been president of the Society for Composers- Mechanical Rights, Austro-Mechana.