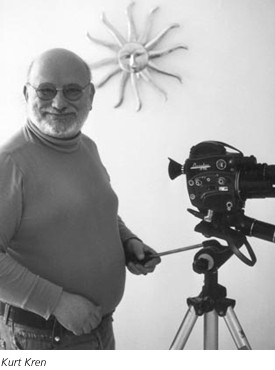 From 1952 on, he made a number of experimental 8 mm films (some in collaboration with Konrad Bayer), which however have all been lost, and maintained close contacts with Marc Adrian and Pahdi Frieberger, later also with the Op artist Helga Philipp. Since 1957, 16 mm films using serial assembly technology, which constitute Kren’s chief works. Thus, in addition to Peter Kubelka (who also organized Kren’s first film screening in 1961 at the Viennese venue Galerie nächst St. Stephan), Kren is considered one of the leading representatives of structural film. 1964–65 he made a number of films based on so-called material actions staged by Otto Mühl and Günter Brus.