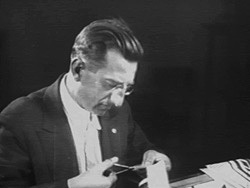 Nikolai Voinov (1900-58) began his career as an animator in 1927. In 1930 he was involved in the production of the first drawn ornamental soundtracks at Avraamov’s Multzvuk laboratory. In 1931 he left and started his own research at the Cartoon Studio of the Moscow Film Factory as a developer of ‘Paper Sound’ techniques. These were based on the synthesis of sound waves by means of paper cutouts with the carefully calculated sizes and shapes produced by his newly invented tool, the Nivotone. (Andrey Smirnov)