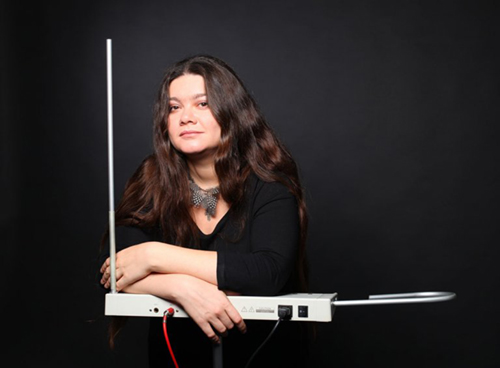 composer, thereminist, carillonneur, organist Olesya Rostovskaya was born in 1975. After Russian Central Music School, from 1993 to 2000 she completes her study at Tchaikovsky Moscow Conservatory with specialization “composition” and in 2001 with “organ”. From 1999 she began to play theremin. From 2003 she began to play Russian bells and from 2006 – to play carillon. In 2008 she has graduated the Saint-Petersburg State University as carillonneur (the first in the world Russian Carillon Diploma) and in 2009 – Royal Carillon School “Jef Denyn” in Mechelen (Belgium). Now Olesya has huge activity as a composer with her compositions, which already played in Russia, Ukraine, Belorussia, Kazakhstan, West Europe and USA. Her music was awarded by several music contests. Olesya also is active performer with authentic, classical and contemporary repertoire and improvisations. Member of Russian Composers Union, Member of Russian Association of Electro-Acoustic Music, Member of Association of Russian Organ Art, Member of Russian Carillon Foundation.