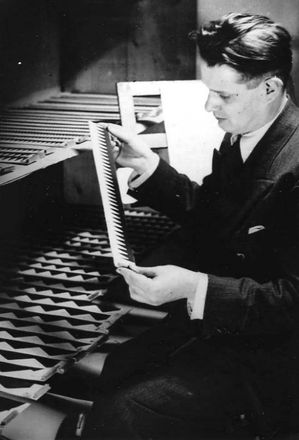 In 1918 Pfenninger began experimenting with film, from 1921 on, he worked as a cartoon animator. Particularly his attempts to make sound frequency visible on film made him famous. Pfenninger attempted to transfer tone directly to an optical track even before the Scot McLaren pioneered this technique. With that Pfenninger created so-called ‘drawn music’, which is based on an electroacoustic conversion of drawn, geometrical figures. In addition, Rudolf Pfenninger produced short, experimental animated films and created a veritable ballet over a track of synthetic sound. Pfenninger’s phase of avant-garde film experiments ended with the National Socialist rise to power. During the next 13 years he concentrated almost exclusively on designing film scenery. Later Pfenninger dedicated himself to illustrating promotional films.