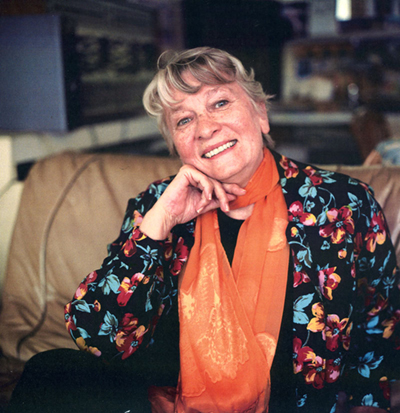 Eliane Radigue was born on the 24th of January 1932 and grew up in Paris. During her childhood, she studied piano, harp and choral singing. During the 1950s she lived in Nice and “played around with the dodecaphonic series” she said, which she taught herself, after having read the “Treatise on Harmony” by Arnold Schoenberg. She married the sculptor Arman in the early 1950s. In 1954 she discovered Concrete Music on the radio. Fate and circumstances led to her meeting Pierre Schaeffer a few months later, who invited her to go to the O.R.T.F test Studio. She learned studio techniques there, along with the special features of this music. Between 1955 and 1957 she gave a number of lectures on Concrete Music (in Darmstadt, particularly). In 1958, a wife and mother of three children, she put her musical research and studies on hold. During this period Yves Klein, a friend of the family, asked for advice about the composition of his ” Monotone Symphony: Silence” – she recommended that he commission her friend Louis Saguer to arrange the score.

In 1961 the family lived for just over a year in New York, and Eliane Radigue met some crucial people both in the world of the arts (she played chess with Marcel Duchamp) and in the world of music (James Tenney, who she considered to be her mentor, Philip Glass, Steve Reich and John Gibson also became close friends). In 1967, Eliane Radigue and Arman separated. She became an assistant to Pierre Henry with whom she worked for a little over a year, particularly on “The Apocalypse of Jean”. The work on this major piece is very intense: Pierre Henry gave Eliane Radigue two Tolana tape recorders and a mixing desk, which enabled her to set up a small studio in her house, so she could work at home during the most active period of the final mix. Her first piece “Electronic Games” (1967) was composed in Pierre Henry’s studio. The rest were composed at home. The minimalism of her studio would define part of her aesthetics she mainly worked by adding distortion effects to intensive studio techniques: slowing down, superimposing, feedback between two tape recorders, etc.

In 1969 she stopped working for Pierre Henry and dedicated herself to her own work. During 1969 and 1970 she developed a unique approach to the manipulation of distortion techniques and composed works of unlimited duration intended to be broadcast in a space with a number of endless looped tapes, of different lengths, which in mixing together produced a perpetually changing soundtrack. This is the case with “In memoriam Ostinato” (1969), “Omnht” (1970) and “Vice, Versa, etc…” (1970) – sold in groups by the Lara Vincy Gallery in the form of a number of magnetic tapes, limited to 10 signed and numbered copies. Also worth remarking on is her recording of 45 works available to the public “Sigma = a = b = a + b” (1969) premiered at the time at Yvon Lambert’s premises. During this period, her approach to sound was very flexible. Sound is seen as a material for inhabiting space, which it then presents using the term “sound proposals”. These are sound installations, even though this name was not often used From the end of 1970, “Opus 17” is one of her first pieces with a fixed length, and it coincided with the need she felt to broaden her range of sounds. When she heard about the first modular synthesisers, she decided to return to the United States in September, raking up a residency with the University of New York. There, she studied the working of the Buchla synthesiser. This was when she met Laurie Spiegel and Rhys Chatham, who also worked in the New York University Studios. After a period of experimentation she opted for an ARP 2500 synthesiser. One detail that helps to illustrate her approach: she refused to hang onto the keyboard, “to avoid making it too easy” she said, and she worked on sounds from the control desk.

From 1971 to 1974 she composed her first electronic works and gave up her work on asynchronous looped tapes, for a method of composition that relies on “touch”: imperceptible transitions from one world of sound to another. She began to present this “infinitely discreet music, alongside which all others seem to be tugging at your sleeve” to use the words of Michel Chion. In addition, the ARP 2500 synthesiser allowed her to explore the world of harmonics and bass vibrations graves in such a way that the music seemed to “come out of the walls” in the words of Tom Johnson. It was during this period that she composed “Chryptus” (1971), “Geelriandre” (1972) – a unique mixed work by Eliane Radigue combining the piano parts of Gérard Frémy with the fluid sounds of the ARP. Gérard Frémy has been a fierce defender of the work of Eliane Radigue from 1969 – “Psi 847” (1973), “Arthesis” (1973) – which contain traces of input from the Moog of the California Institute of the Arts – “Biogenesis” (1973), “Transamorem-Transmortem” (1973) – one of her last pieces written to be a sound installation – and “Adnos I” (1974). During the 1970s Eliane Radigue travelled to, and stayed in, the United States on many occasions and met Charlemagne Palestine, David Behrman, Robert Ashley, Alvin Lucier, Phill Niblock, Anna Lockwood, Maggi Payne, Pauline Oliveros and David Rosenboom, among others… with whom she shared friendly rivalry and friendship. In France she met Michèle Bokanowski through their mutual friend Gérard Frémy. During the 1970s and 80s, Michèle Bokanowski demanded that tracks by Eliane Radigue be included in her own compositions, as well in the soundtracks for the films by her husband Patrick Bokanowski. As a result, you can hear the ARP of Eliane Radigue most notable in “The Angel”, one of the masterpieces by this experimental film maker. In 1974 after a performance of “Adnos I” in San Francisco, a group of French students led her to discover Tibetan Buddhism. On her return to Paris, she began an in-depth search into her spirituality and this slowed down her musical output until 1978.

Between 1978 and 1993, she composed a number of her greatest works. “Adnos II” (1980), “Adnos III” (1981), “The Songs of Milarepa” (1983) – with the voice of Lama Kunga Rinpoche and Robert Ashley – “Jetsun Mila” (1986), as well as the three parts of the “Trilogy of Death”, “Kyema” (1988), “Kailasha” (1991) and “Koume” (1993). All of these are informed and inspired by Tibetan Buddhism, while all remaining profane – Eliane Radigue insists on this point. In 1989 her son was killed in a car accident, which had a long-lasting effect on her. In 1998 she was invited to spend two months as a professor at Mills College in Oakland. She presented the “Labyrinth Sound”, using the sounds of an ARP punctuated by solos from numerous musicians including Pauline Oliveros, Maggi Payne, William Winant or David Abel.

In 2000 she composed her last electronic work, “L’île re-sonante ” [the Echoing Isle], which won her the Golden Nica at the Electronic Arts Festival in Linz in 2006. Following a suggestion by Kasper Tœplitz, in 2003 she began work on a composition for one or more instrumentalists, with whom she worked intensively during the creative process. Since 2004, she has collaborated with Charles Curtis – a virtuoso cellist for whom La Monte Young and Alvin Lucier have written pieces – which has led her to focus exclusively on acoustic sounds. This experience continued with Carol Robinson and Bruno Martinez, both basset horn players. With these three musicians, she composed the remarkable cycle in three parts “Naldjorlak”. She has been producing this music with its infinitely delicate and enchanting tones that last without breaking the aesthetics and the beauty of her electronic work. Emmanuel Holterbach (Translation Brainstorm)