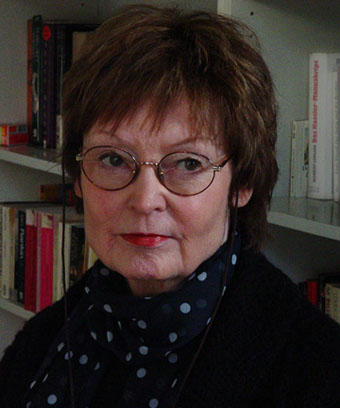 Heidi Grundmann (1938) grew up in Innsbruck/A and studied psychology in Innsbruck and Vienna. In 1962 she was offered a job as a full time announcer in the regional studio of the ORF, the Austrian National Radio in Innsbruck and accepted it. After a short interlude at the German Service of the BBC (1967 – 1969) she went to Vienna to join the cultural department of Österreich 1, the cultural channel of ORF, as a cultural reporter and art and theatre critic. In 1976 she moved on to become an editor and producer of a regular radio show on issues of international contemporary visual and media arts (Kunst heute, since 1984 Kunstradio).

She specialised in producing radio art (Kunstradio-Radiokunst) at the end of 1987, at a time when radio was on the brink of one of its biggest changes due to digitalisation and the internet. In 1992 she was one of the founders and then chairperson of Transit, a non-for-profi t organisation for the realisation of „art in the electronic space of radio and TV“. In the early 1990‘s she also became the coordinator of the Ars Acustica Group at the EBU (European Broadcasting Union), which consists of radio art producers in international Public Radios. The constellation of Transit and the Ars Acustica group, together with many artists around the world, made it possible to develop and realise innovative intercontinental networked radio-art projects such as the legendary „Horizontal Radio“ (1995) and „Rivers & Bridges“ (1996) projects.

Along with many other projects and issues, Heidi Grundmann, as the producer of Kunstradio until 1998 and as an occasional consultant until 2000, kept encouraging the further artistic investigation of the relationship between radio and the internet in projects like e.g. „Familie Auer“ (1996/97), „Recycling the Future I – IV“ (1997), „Immersive Sound“ (1998) and „Sound Drifting“ (1999). She continues to write and lecture on issues of radio-art.

Since the 1970s, Heidi Grundmann‘s specialised work in the arts and radio led to her appointment to different juries (federal Austrian visual art and media juries, art in the public space juries, and occasionally also international juries, among them DAAD, Berlin). She curated exhibitions and symposia, contributed to international art publications and catalogues and edited several publications such as e.g. Art + Telecommunication, BlLIX, Vienna, and Western Front, Vancouver, 1984, ZEITGLEICH, Triton Verlag, 1994, or SOUNDDRIFTING I Silenzi Parlano Tra Loro, Triton Verlag, 2000.