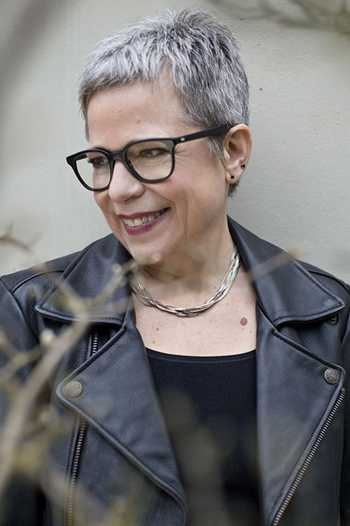 Flute, text, and electronics. Performance, improvisation, and composition. The peaceful expansion of the war zone. These are essential components of Anne La Berge’s music. Moreover, the Amsterdam-based interdisciplinary artist is keenly interested in emphasizing the social settings that inspire her aesthetic intentions. Bob Gilmore comes straight to the point in the booklet of her fabulous CD Speak: “Her performances bring together the elements on which her international reputation is based: a ferocious and far-reaching virtuosity, a penchant for improvising delicately spun microtonal textures and melodies, and her wholly unique array of powerfully percussive flute effects, all combined with electronic processing.”

Anne La Berge is born in California and grows up in a musical family in Minneapolis. Her mother plays violin, her father, a psychologist by profession, is choir director of the local Bach Society. That leaves its mark. Actually she is supposed to learn jazz but becomes much more interested in classical music. She studies at Northwestern University, then transfers to the University of New Mexico where she studies flute with Frank Bowen and begins to play Renaissance instruments. Parallel to this she immerses herself the music of Varèse and Stockhausen, Oliveros, Feldman, and Cage and earns her Masters degree at the University of Illinois, then moves to Los Angeles. There, together with Larry Polansky she founds the publishing collective Frog Peak, for which she writes her first compositions.

In 1989 Anne La Berge moves to Amsterdam, where she has lived ever since. In Holland the composition world is much too male-dominated for her varied musical (and political) intentions so she searches for a more appropriate, emancipated environment and writes what she calls “composer/performer pieces”. But even here in the relative autonomy of the improvisation scene patriarchal conditions still sometimes prevail. La Berge: “I was naive enough not to see in the improv field there still are few women. Basically. They’ve gone into performance art.”

In order to change that Anne La Berge, Cor Fuhler, and Steve Heather found the soon to be very influential international improvisation series Kraakgeluiden in 1999. With this series La Berge, Fuhler, Heather and their guests explore the various combinations of acoustic instruments, electronic instruments, and computers, mainly in squatted buildings. In the course of these in many respects cutting-edge research projects Anne La Berge develops real-time interactive performance systems.

In 2006 Kraakgeluiden’s glory days come to an end and it is transferred seamlessly to another organizational form: the VOLSAP Foundation, which La Berge founds together with her husband, the guitarist and composer David Dramm. It is an important platform for contemporary music and also provides performance opportunities. Currently it organizes small-scale, informal concert series like the Amsterdam muzyQ or the mini festival field of ears as well as Anne La Berge’s masterclasses and improvisation and technology workshops. The main goal of the VOLSAP initiative is to bring like-minded artists from various fields together and support them in projects and productions, to create a workspace with the necessary technical equipment, and provide artists with performance opportunities. As its venue it has secured the Splendor Amsterdam, an old bath house that is home to a collective of roughly fifty composers, musicians, and performers, “… a sparkling cultural mecca … incredible place!” Anne La Berge exclaims.

Her Early Days of Electronics

Often she lets her signature, at times gutsy, flute techniques collide with the sounds of punk e-guitar. In this context La Berge has to play louder than the flute permits. “There are innumerable musical situations where I need to be amplified or where I would rather be using electronics. When I play with electric guitar players, laptoppers or musicians using some kind of electronics, it is important to me to be part of the general electro-acoustic mix. All explanations aside, I simply love to play with them!”

She puts together an array of effect pedals and later adds an interactive computer system that allows digital processing techniques in live performance. Anne La Berge on her early experiments with electronics: “My first use of electronics was the use of the microphone. Playing the flute with a close mic amplifies some of the most magical aspects of our sound: whistles, harmonics, consonant and vowel resonances, to name just a few. I went on to use hardware to process the flute audio starting with commercial FX units and then using the Clavia Micro Modular, the Clavia Nord Modular G2 and now I am a dedicated Kyma System user. I have also performed works using Max, Supercollider and Ableton Live. I use Max in conjunction with the Kyma in most of my own pieces. I am intrigued with extending the sounds of the flute by using electronics and I appreciate that I can use an incredible dynamic range with the aid of electronics. Sometimes, in an ensemble setting, the flute cannot be heard. I have developed audio processing where I can be heard in almost any musical situation if need be.”

Text as an Integral Part of the Composition

Text, its precise, completely novel use, and the plethora of possible forms play an important part in her musical work. These give rise to an almost mathematical facet as well as an unbridled desire to play with language. “I choose my texts for compositional purposes. I would prefer to write all of my own texts, but sometimes more academic or more field-specific texts are better suited for the piece. In LonelyStats I used descriptions of baseball rules and activities that I found on the internet because the jargon worked so well. Oftentimes I write poetry or prose to inspire me and then I use it in the performance. This has become such a trusted way of working for me for the last decade that I’ve come to regard text as an integral part of my compositions and then when I don’t use it, I feel like I’m taking a radical step.” For quite some time La Berge has dedicated herself to two ensembles in particular: Shackle and MAZE. In Shackle she operates with the laptop musician Robert van Heumen. Together they have developed a digital system of communication that at times emerges as a third band member. MAZE focuses on various phases of modern music and aims at giving the listener a new understanding of music and expanding his/her listening perspectives. This is reflected in older works by Cage, Lucier, or Ashley as well as contemporary ones by artists like Marclay, Sharp, or MAZE members Kyriakides and La Berge. In addition, from time to time she is also a member of Cor Fuhler’s Corkestra, Lucas Niggli’s Big Zoom, and a soloist with Ensemble Modern. She collaborates with bassist Joe Williamson, vocalist Stephie Büttrich, electronics musician Gert-Jan Prins, guitarist Lukas Simonis, trumpeter Stephen Altoft, and flutists Theresa Beaman and Katherine Kemler, among others. In answer to my closing question as to whether she finds that to her the acoustic and the electronic have long since become inextricably entwined, so that she can no longer imagine one without the other, Anne La Berge is ready with a surprising answer: “I enjoy playing the flute alone and with other musicians in purely acoustic settings immensely. I actively seek out performing opportunities where I can improvise or perform without electronics. Acoustic instruments have such a rich repertoire of sounds and the music that is composed for us or that we improvise keeps me endlessly fascinated and aesthetically enriched.”